Tim was a smartly dressed, well-groomed salesman everyone loved; the prospects, his customers and the entire sales team. This included a real bitchy pair of customer service staff that we had to interact with each day because they forwarded us messages when new prospects had called head office.

As charming as I can be, I never managed to get on the good side of those two. I sent chocolates into the office on their birthdays, I made extra effort to ask them how their day was going and to make small talk I spoke with them on the phone.

However they were seemingly just not interested in being anything but snappy and short on the phone and blanking the entire sales force on the rare occasion they were in the head office.

After I left that company I bumped into Tim and as we caught up I asked him how he managed to firstly to get a conversation going with the girls when he was in the office and then build rapport quickly with them in the limited time he had.

Intrigued, I bought him a coffee and I asked him to tell me more. 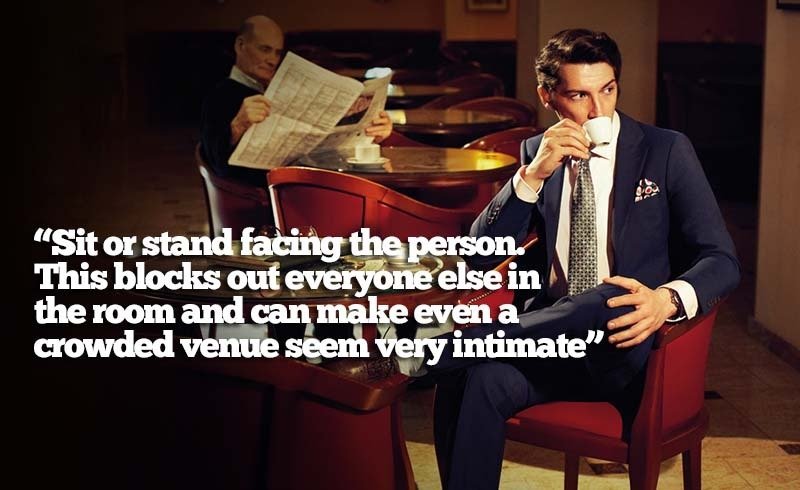 “In a Disney film, when someone loves what they’re being told, what happens to their eyes?” Tim asked me.

“They get bigger and wider” I spluttered back as I burnt myself on my steaming coffee.

As soon as I said it I knew that Tim was onto something as I’d just tried to speak with my mouth full of coffee in an effort to quickly reply to his question. I was driven to give him a fast response because his eyes were wide with anticipation.

Additionally Tim explained that if you’re in a group situation you should make your eyes stick to the person that you want to build rapport with, not necessarily the person who is speaking. This suggests that you’re excited to hear their response rather than the question.

Next Tim compared how we were both sat in the coffee shop. I was sitting back in my chair, cup in hand, one leg crossed over the other. Probably in an unconscious way trying to look cool in front of a man I respected.

Tim however was sat feet planted on the floor, toes pointed towards me, leaning forward and away from the table.

To anyone observing from the other side of the room it looked like I was giving the information and Tim was lapping it up not the other way around.

“Sit or stand facing the person. This blocks out everyone else in the room and can make even a crowded venue seem very intimate” Tim explained as I instantly recognised what he was saying and so shifted my body language appropriately.

“What else?” I asked as Tim started to up the pace of his conversation.

“Keep your hands down and still. If you’re touching your face or fidgeting it draws away from the eye contact and the moment you’re quickly creating”.

At this point I was hoping the next step to making people instantly like you wasn’t leaning in for a snog. However Tim was spot on, most people fidget, play with their phone or touch their mouth and face when their speaking.

You can really set yourself apart and show that you’re not nervous or anxious (even if you’re meeting with that big shot CEO) by keeping still.

“The final and most powerful thing” Tim said as he slowed down his voice and leaned in even closer.

“Imagine that you’ve know the person for years, decades even. This triggers all kinds of subconscious body language that drops people’s guards down and allows instant rapport to be built”.

This makes massive sense as you’re short circuiting the person’s brain into thinking that at least on your end you guys are great friends. This leads to all kinds of social pressure to reciprocate the behaviour.

“I used to do each one of those things when I met with the customer service girls”, “After 5 minutes of chatting I always got a hug goodbye and the truly felt that we’d been best friends for years” Tim proclaimed as he now sat back in his chair.

“Just think, I’d probably spent less time talking to them than you did because I was in the office less than you as I’m based further away”.

The ‘eyes, forward, still, old’ method of instantly getting people to like you is something I do to this day when I have a small amount of time to speak with prospects.

It’s a powerful way to use body language and eye contact to make someone feel special and who doesn’t want to buy from someone who makes them feel great?