> Tips/Advice > What motivates you to sell? (For me it’s being financially free at 33)

What motivates you to sell? (For me it’s being financially free at 33)

I’m convinced that if I didn’t have a specific date to get out by, working in sales would kill me.

I hate having to put a fake smile on my face before I meet every potential prospect.

I hate having to research, then cold email 50 people knowing that I will only get business from 1 of them.

I hate not being able to attend family events because meeting with a prospect takes priority.

Yet I LOVE SALES.

I can improve on any one of these variables and increase the amount of money I churn out the other end of the hustler equation pretty easily.

This is important for me as I’ve a specific financial goal that I’m working towards.

76% of Americans live paycheck to paycheck. If you’re part of that 76% you need to be scared.

You are one paycheck away from having your life turned upside down.

You are working right this minute to survive the next month. You’re treading water.

You could punch a customer in the face and get sacked (I’ve been close to this before apart from I’m skinny and weak so I’d like have been beaten up swiftly thereafter).

Heck, the company you work for might just turn around one day and say you’re no longer needed. Sales is changing, the quantity of sales people employed is no longer as important as the value they individually provide so this isn’t unreasonable if you’re not a top player.

If you’re a single guy working in sales then the worst case scenario is likely that you move back in with your parents until you get back on your feet.

If you’ve got kids or a mortgage then I’m sorry but you’re screwed.

How is that for some motivation to save money?

For the past few years I’ve been working towards one thing and one thing only.

I’m willing to work 14 hour days to achieve it.

I work 7 days a week to accelerate it.

I was willing to take a risk in quitting a well payed medical device sales job to start Salesman.Red to give me further leverage over the variables in the hustler equation.

Every minute of every day I’m thinking about and moving towards FIRE.

I’m willing to put up with customers that annoy me. The endless hours of prospecting and emailing. The stress of not having a firm paycheck each month and even missing funerals.

I’m willing to put up with all the crap because I’m using sales as a way to accelerate my journey to retirement.

I have a clear goal to work towards.

Money Is A Game

This is where most people (including myself for a long time) go wrong with sales. It’s not a career that most people want to be doing until they’re in their mid 60s.

You will end up old and miserable.

I’ve seen it happen to sales managers. The ones that constantly have bright red faces, a fat belly and drive red German cars.

They often retire, get ill and then die in that first year after retiring.

They don’t realise that money is a game and you win when you have enough assets that pay you enough month on month to survive without working.

Most people never get to this end point. They require handouts from the government to put food on their tables.

Even then they waste a chunk of this ‘free money’ on gambling and alcohol.

They feel entitled and they shouldn’t because they lost the game.

But if you can win this game earlier, then your life will be different.

Can You Achieve FIRE As A Humble Salesman?

Hell yeah you can.

Let’s look at the averages – 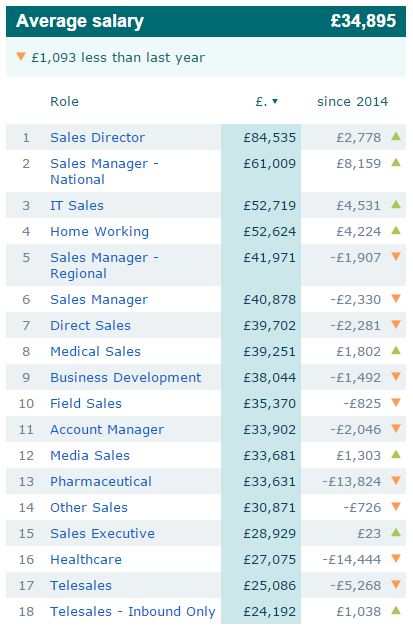 So in the UK we’re looking at around £35k a year as an average salary (if you’re reading this blog and hustling you should be earning double this).

You’d take home around £27k after taxes and to make things easy let’s say your partner works in sales as well so you’re looking at £54k take home after tax each year.

Say you read this article straight out of University, it takes a couple of years for you and your partner to get up to speed before you’re both earning £35k a year (which is very low if you’re putting in the hours) at the age of 23.

How have you spent this cash?

If you’re like most young sales people you’ve lived in a cool flat, you drive a nice BMW and you eat out 3 nights a week.

Why the heck not, you work hard don’t you.

So after working for a decade you’ve also likely saved… ZERO pounds.

That’s right, most 33 year olds in the UK have more debt than assets.

Crazy more debt than assets if you include the little house that you just bought (no matter what your Dad tells you a house that you live in is not an asset. Assets make you money. Debts cost you money. Do you pay a mortgage? Thought so).

Anecdotally almost every salesman I know lives paycheck to paycheck.

They live well above their means.

Swag is more important to them than financial freedom.

This is fine as long as they know the rules to the money game but many of them don’t.

What if our imaginary couple lived below their means?

Perhaps our couple are more concerned with freedom than keeping up with the cars their friends are driving.

Perhaps they manage to live on the following monthly budget –

Over the longer term they’re buying back the hours they’re currently investing.

With a measly 4% interest rate on whatever they invest their cast into they’re left with a lump sum of around £524,000 between them at the age of 33. 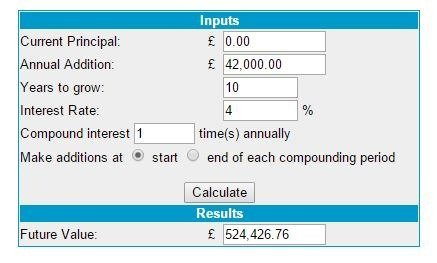 At just 33 their net worth is likely bigger than anyone else in their company other than those nearing retirement or in C-Suit positions.

But it’s what they do with this lump sum that is where the magic happens.

I’m not sure where I first came across the 4% rule. It might have been on Reddit or over at MrMoneyMustache.com.

However it changed my life in an instant.

It gave me a clear goal.

It gave me a way of winning the game of money.

It gave me a pathway to true financial independence.

If you would have asked me how much money I would need to retire before discovering this game changer I’d have said a couple of million.

The 4% rule dictates that if you invest a chunk of money correctly, you can safely withdraw up to 4% of it yearly without it going down.

Therefore if our couple invested their £524,000 they would get a completely passive return of £1746 per month.

As their living costs are only £1,000 a month they can choose to be slightly less frugal or reinvest the extra cash so their passive income will continue to go up in time.

Back To The Point

Now let’s come back to the hustler equation.

It’s not unreasonable to earn £100k+ in a sales role in the UK if you put the effort in. That would get you to true FIRE in less than 5 years.

This is why I LOVE SALES.

It gives me the opportunity to be genuinely be in control of the money game.

It gives me a real shot at winning.

Your heart should be beating faster. You should have a smirk growing across your face.

You are in one of the few careers that gives you this opportunity.

You lucky bastard you.

My motivation to sell is to simply win the game.

To never have to sell/work/trade my time for money ever again (if I choose not to).

Sales is a powerful vehicle here because I’m in complete control of the leverage points within the hustler equation but I also choose the end point.

As I value experiences over materialistic bling (it wasn’t always this way) my FIRE number isn’t huge. It’s around the £500k mark.

This would enable me to –

Every time I close a deal for £7k I get excited as I’m 1% closer to my dream. I’m then even more motivated as I can see that I’m getting closer.

These numbers improve when I move in with my girlfriend too as expenses will drop.

Now that’s not to say that I’m going to retire on my 33rd birthday, move to Thailand and live the 4-Hour Workweek dream.

Which would be sitting on a beach, sipping cocktails letting the cash roll in whilst I take advantage of the Pound to Thai Baht exchange rate.

I’m well aware that I’ll likely continue running Salesman.Red once I hit this goal in 5 years’ time at the age of 33.

But it will be my choice as to whether I want to write a blog post or record a podcast. I’ll be doing it to simply help people rather than now where I still have to cater to our advertisers demands (sometimes).

However I’d have quit the world of sales long before now if I was just surviving month on month, paycheck to paycheck.

The stress of working for a month just wouldn’t justify being able to buy the crap I wanted for the next 4 weeks.

FIRE is my sales motivation. Tell me what you’rs is in the comments below…

Book – The Millionaire Next Door

Book – Your Money or Your Life: 9 Steps to Transforming Your Relationship with Money and Achieving Financial Independence